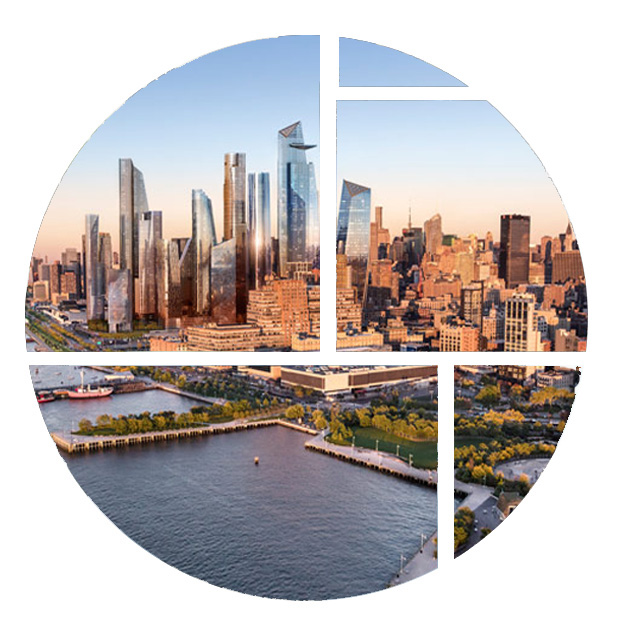 Nicknamed “The New West Side”, Hudson Yards is the new neighborhood for those looking to live in the heart of New York City. Located between 10th and 12th avenues from West 30th to West 34th Street, Hudson Yards comes in high demand, boasting a prime location only ten minutes from Port Authority and Times Square. The opening of the 7 subway line in 2015, adds further value to any New Yorker who relies heavily on public transportation. Blending seamlessly into its surrounding neighborhoods of Chelsea and Hell’s Kitchen, Hudson Yards is brimming with culture and nightlife, a definite draw for the young professional crowd. With the opening of the High Line in 2009, the city transformed abandoned rail tracks into a public park, causing the value of the surrounding neighborhoods to skyrocket with investors spending nearly $2 billion, adding 12,000 new jobs, and 29 building projects in the newly popular neighborhood.

Situated atop 28 acres of a working rail yard, Hudson Yards is the largest development in New York City since Rockefeller Center was completed in 1939. Spanning over 18 million feet, this site will include over 4,000 residences, 14 acres of public space, multiple office buildings, a public school, and a luxury hotel. 10 Hudson Yards, which opened in May 2016, is the first completed building. The building is fully leased and includes tenants such as Coach Inc., and L’Oreal USA. 30 Hudson Yards, expected to be completed in 2019, will be home to many leading media and financial companies including HBO, CNN, Time Warner, and Wells Fargo Securities. When completed, the building will stand at 1,296 feet high and will receive the title of the second tallest office building in Manhattan.

In efforts to be environmentally friendly, the developers at Hudson Yards are building revolutionary and innovative ideas into the site. One of these ideas includes the conservation of rainwater for irrigation. Every drop of water that falls on the public square and gardens will be collected into a 60,000 gallon tank later to be used to water plants. Ultimately, this conservation will save 6.5 megawatts of energy and offset 5 tons of greenhouses gases every year. In order to regulate the temperature of the train yard below the development, a network of tubing will circulate cooling liquids and a ventilation system will employ fans that are used on commercial jet engines to circulate air.

Due to its innovative techniques and modernity, Hudson Yards, once completed, will become the trendiest and most sought after neighborhood in Manhattan.